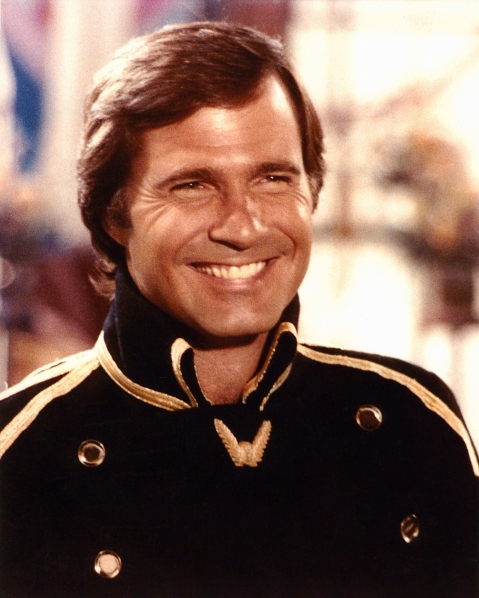 Gil Gerard has starred in numerous successful made-for-television movies as well as feature films.  However, his millions of fans prefer to remember him as “Buck Rogers” from the Universal motion picture and NBC series, “BUCK ROGERS in the 25th CENTURY”.

A native of Little Rock, Arkansas, Gil headed to New York in the summer of 1969 where he found a job as a taxi driver and began training with Phillip Burton at the American Musical and Dramatic Academy.

It wasn’t long before Gil found himself working in the “business”, however, when one of his fares told him he should audition for “Love Story” which was filming in New York at that time.  He auditioned, got the job, worked on the film for about ten weeks and never looked back.

Following “Love Story”, Gil began auditioning for and getting commercials for various national accounts, including Coca-Cola, Ford Motor Co., Procter & Gamble products such as Dristan, Loving Care, Campbell’s Soups, etc.  All in all, Gil ended up starring in over 400 television commercials during the eight years he was in New York. Gil also joined the cast of the Emmy Award winning “The Doctors”. He played returned prisoner of war Dr. Alan Stewart for 3 and 1/2 years.

During this time, Gil formed an independent production company with two partners and produced a low-budget feature film entitled, “Hooch” and a Broadway musical, “The Amen Corner”, based on James Baldwin’s award-winning play of the same name.

It was also during this time that Gil was called to Hollywood to screen test for several new projects that were being considered.  He had also attracted the attention of top Hollywood agent Meyer Mishkin, who called him to the West coast to guest star in an episode of “Baretta” with Robert Blake.  While shooting this series at Universal Studios, Gil auditioned for and landed the role of Lee Grant’s lover in “Airport ’77”.

After landing a guest starring role on “Little House on the Prairie” in which Gil played the role of an itinerant carpenter who built the Ingalls’ kitchen and fell in love with Caroline Ingalls, Michael Landon offered him the lead in a new series he was producing and writing entitled, “Stone”.  The series wasn’t picked up by NBC but Gil was. He was offered the title role in a feature and series deal involving Universal Pictures and NBC entitled, “Buck Rogers in the 25th Century”. The film was a huge commercial success, grossing over 11 million dollars in its opening weekend (this is in 1979 dollars, today’s figure would approach 30 million dollars) becoming one of the top five grossing pictures of the year.

Gil followed the success of “Buck Rogers” with several highly rated M.O.W.s (movies of the week), including “Help Wanted: Male” with good friend Suzanne Pleshette, which garnered an impressive 47.7 rating share, making it the second highest rated TV movie in the history of television; “Not Just Another Affair”, with Victoria Principal; “For Love or Money”, again with Suzanne Pleshette; “Hear No Evil”, portraying real life San Francisco detective Bill Zerbe deafened by an explosive attempt on his life by the Oakland- based “Hell’s Angels”, whom he was investigating for drug manufacturing and murder; and “Stormin’ Home” in which he starred as an irresponsible ex-husband and father who dreams of becoming a champion Motocross rider and gaining the respect of his ten-year-old daughter.

Interspersed with these M.O.W.s were several series that included “Sidekicks” for ABC in which Gil starred as Detective Jake Rizzo, a disheveled but appealing bachelor who, unwillingly at first, becomes the guardian of an eleven-year-old martial arts expert played by Ernie Reyes, Jr.  A series for CBS entitled “E.A.R.T.H. Force” followed in which Gil starred as the leader of an environmental task force charged with patrolling the world fighting environmental crime. In a series for NBC and Aaron Spelling, Gil was reunited with good buddy Suzanne Pleshette for “Nightingales”.  Two years hosting the Fox Television series, “Code 3” followed.

Gil produced, narrated and was the principal subject of a one-hour special documentary for the Discovery Health Channel entitled, “Action Hero Makeover” which aired on Jan. 10, ’07.  The documentary won an international award as the best medical documentary dealing with obesity. In addition, he filmed an MOW for the Fox T.V. Network entitled, “Beyond” in which he plays the commanding general of U.S. Space Command.  He has also completed filming of “Nuclear Hurricane” and “Reptisaurus”, “Dire Wolf” and “Ghost Town” which was filmed in Bulgaria, Gil’s first trip to Eastern Europe.

Gil enjoys tennis, golf, scuba diving, trap and skeet shooting and horseback riding.  He is also a licensed pilot and a published poet, having seen his work included in an anthology of American poets.

Gil’s many charitable endeavors have included serving on the board of  “People in Progress”, an L.A. group committed to finding jobs and housing for homeless women with children. In addition he has been active for the past thirty years with Special Olympics and the Make-A-Wish foundation. He has also hosted several Celebrity Golf tournaments to benefit the Down Syndrome Foundation. He states that if it has to do with benefiting children in any way he’s there for it.